Does co-cultivation of seaweed and mussels on ropes bring mutual benefits?

Does co-cultivation of seaweed and mussels on ropes bring mutual benefits?

More and more seaweed farmers are looking for locations to produce seaweed off shore and nearshore. Former studies of HZ University of Applied Sciences have shown that the available space in the Southwestern Delta of the Netherlands is very limited for these kind of food production. It turns out that most possibilities to be used for seaweed faming lies in using the open space (30% not used) at mussel rope cultures plots. Apart from that, several plans to combine seaweed with shellfish are developed in wind mill parcs. Theoretically the organisms mussel and seaweed (both lower in the food chain) may have a possible positive influence on each other (1+1=3). On the other hand there may also be negative feedback loops between the two (1+1=1.5)(see figure below). These theoretical mutual influence is however hardly tested in practice on a production scale. 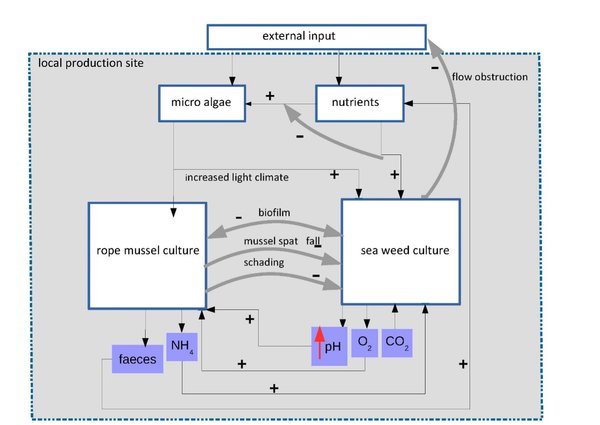 Figure 1. Possible negative and positive feedback loops in co-cultivation of seaweed and mussels.

In the so-called ZEEMOS project (September 2020 – September 2023) different sugar kelp (Saccharina latissima) and blue mussel (Mytilus edulis) rope culture farmers are testing these possible mutual positive and negative effects on 3 different sheltered production locations (Lake Veere, Oosterschelde, North Sea). In this project,  HZ University of Applied Sciences, in the first year, characterized the three production locations in terms of nutrient and microalgae concentrations and fluxes, water velocity (both rate and direction), retention time and water quality parameters such as turbidity and light intensity . This was carried out by the combination of online sensoring and large measuring campaigns. In this second and coming third year HZ performed larger manipulative experiments to determine how different combinations of seaweed and mussels effects production of mainly seaweed, and on-site water quality and hydrodynamics.

The first draft results show, on one hand, that the influence of seaweed activity on mussels is very limited and dependent on the local characteristics of the productions sites. The water retention time at the production site was very short (max 7 hours). So the fast majority of the microalgae, as feed for the mussels, enter the production area  from outside. On the other hand, mussel activity can enhance the growth and production of seaweed, by increasing the light penetration. Mussels are filter feeders, they filter the microalgae and organic particles out of the water at a rate of 2 – 3 liter/ hour/mussel. In periods where light is the limiting factor this increased light condition may result in increased seaweed growth and production. The first draft  results of this second project ZEEMOS year give indications for this phenomena. The sugar Kelp, stocked in November and harvested mid of April reaches densities up to 8 kg Wet Weight/m and  a length up to  1.70 m. 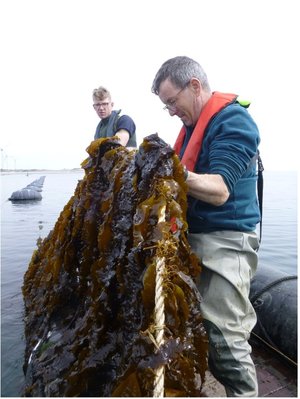 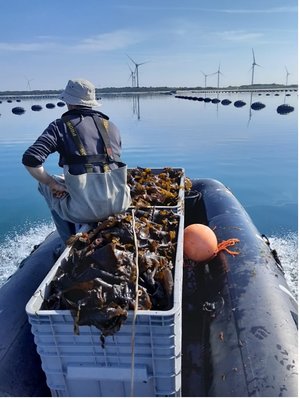 Figure 2. Harvesting sugar kelp in April 2022 at location Mattenhaven in the Netherlands, stichting Zeeschelp and HZ University of Applied Sciences

More information at https://projectenportfolio.nl/wiki/index.php/PR_00329 (in Dutch)